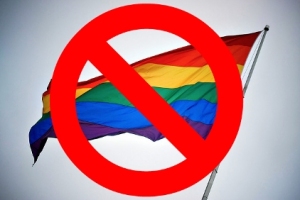 Not everyone agrees with Gay Marriage!

Being bullied into any belief is a crime!  The majority of people don’t actually support Same Sex Marriage.  So why the big push to have this in our society?  The big push comes from one of the lowest tactic’s that are available to man-kind, being “Bullied”.

“IT seems to have boiled down to this. If you don’t support the rush towards gay marriage, you are either out of touch or just a bigot. Or worse still, you’re a mean-spirited and gay-hating denier, standing in the way of love … and you ought to be ashamed.

These are familiar arguments to any politician or public commentator who has taken a stance against the ­fashionable and fast-moving tide to redefine what marriage is about.

In parliament, those who oppose a change on both sides of politics are a frightened majority.

Not that you’d know it.

A casual reader of the news could easily be left with the impression that this is all just a fait accompli.

Here we are again, back in the zone where having an ­alternative view makes you the enemy.

Speak against the fashion and be prepared to be smeared, ridiculed and bullied.

These are the climate change tactics back again.

Something is wrong with you if you haven’t decorated your Facebook photo with rainbow colours. Good luck if you have but it turns out you’ve been sucked in by yet another data-collecting exercise.

Those who resisted were “deniers”, “out of touch”, “fossils and dinosaurs”, “selfish” and “in the pocket of the oil companies”.

The left is again framing its debate so that anyone who disagrees is bashed into a lonely corner.

It’s a schoolyard tactic that has spineless politicians frightened of speaking out.

Large sections of the media have drunk buckets of the Kool-Aid and have lost all objectivity on the issue.

It’s just like the dirty game of push-polling. Keep telling them change is inevitable and if you don’t believe that, here’s another survey to prove it.

And, if that doesn’t work, pull out the “international embarrassment” card.

How many times this week have you heard that we should be there too — just like New Zealand, Ireland, and now the United States?

It’s dumb logic but it works.

Something is wrong with you if you haven’t decorated your Facebook photo with rainbow colours. Good luck if you have but it turns out you’ve been sucked in by yet another data-collecting exercise.

The marriage equality argument has come down to humiliation and ridicule and a claim that to resist is to sit on the wrong side of history.

Just like climate change, and the push towards a republic in the late ’90s, gay marriage has become the latest and greatest moral challenge of our times. The trouble is, it’s not.”

Personally, I think Gay Marriage is terrible and should not be allowed!  Being bullied into believing Gay Marriage is suitable, reflects on how appalling the whole idea is anyways.  Don’t let anyone tell you that this new push for equality is appropriate.  Don’t let anyone bully you into thinking that you are a bigot, just because you think Gay Marriage is gruesome and vile.  If you can, report any bulling to the proper authorities to stop this aggravation. Don’t let the internet brain wash you into thinking that same sex marriage the norm, because its not!