Engineered muscle fibers are strong and could self-repair: 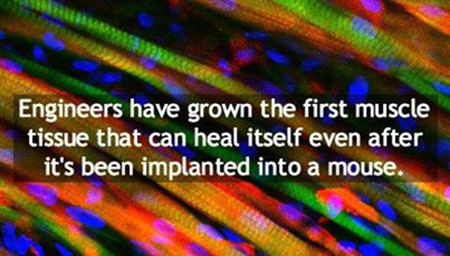 Scientists have grown living muscle in the lab that not only looks and works like the real thing, but also heals by itself – a significant step in tissue engineering.

Ultimately, they hope the lab-grown muscle could be used to repair damage in humans.

So far trials have tested this out in mice.

Duke University researchers say their success was down to creating the perfect environment for muscle growth – well-developed contractile muscle fibres and a pool of immature stem cells, known as satellite cells, that could develop into muscle tissue.

In tests, the lab-grown muscle was found to be strong and good at contracting and was able to repair itself using the satellite cells when the researchers damaged it with a toxin.

When it was grafted into mice, the muscle appeared to integrate well with the rest of the surrounding tissue and began doing the job required of it.

They say more tests are needed before they could move the work into humans.

Lead researcher Nenad Bursac said: “The muscle we have made represents an important advance for the field.

“It’s the first time engineered muscle has been created that contracts as strongly as native neonatal [newborn] skeletal muscle.”

UK expert in skeletal muscle tissue engineering Prof Mark Lewis, from Loughborough University, said: “A number of researchers have ‘grown’ muscles in the laboratory and shown that they can behave in similar ways to that seen in the human body. However, transplantation of these grown muscles into a living creature, which continue to function as if they were native muscle has been taken to the next level by the current work.”

There is great hope in the scientific community that stem cells, which can transform into any type of tissue, will transform regenerative medicine.

Scientists have already made mini-livers and kidneys in the lab using stem cells. Others have been looking at mending heart muscle with stem cells.

But cures and treatments are still some years away.