The study, coauthored by Alvaro Pascual-Leone, Director of the Berenson-Allen Center for Noninvasive Brain Stimulation at Beth Israel Deaconess Medical Center (BIDMC) and a Professor of Neurology at Harvard Medical School, found that information can be successfully transmitted between two intact human brains from distances over 5000 miles apart.

The following is excerpt from an article featured on Smithsonian Mag:

In a recent experiment, a person in India said “hola” and “ciao” to three other people in France. Today, the Web, smartphones and international calling might make that not seem like an impressive feat, but it was. The greetings were not spoken, typed or texted. The communication in question happened between the brains of a set of study subjects, marking one of the first instances of brain-to-brain communication on record.

The team, whose members come from Barcelona-based research institute Starlab, French firm Axilum Robotics and Harvard Medical School, published its findings earlier this month in the journal PLOS One. Study co-author Alvaro Pascual-Leone, director of the Berenson-Allen Center for Noninvasive Brain Stimulation at Beth Israel Deaconess Medical Center and a neurology professor at Harvard Medical School, hopes this and forthcoming research in the field will one day provide a new communication pathway for patients who might not be able to speak.

“We want to improve the ways people can communicate in the face of limitations—those who might not be able to speak or have sensory impairments,” he says. “Can we work around those limitations and communicate with another person or a computer?”

Pascual-Leone’s experiment was successful—the correspondents neither spoke, nor typed, nor even looked at one another. But he freely concedes that the test was more a proof of concept than anything else, and the technique still has a long way to go. “It’s still very, very early,” he says, “[but] we can show that this is even possible with technology that’s available. It’s the difference between talking on the phone and sending Morse code. To get where we’re going, you need certain steps to be taken first.”

Indeed, the process was drawn out, if not downright inelegant. First, the team had to establish binary-code equivalents of letters; for example “h” is “0-0-1-1-1.” Then, with EEG (electroencephalography) sensors attached to the scalp, the sender moved either his hands or feet to indicate a 1 or a 0. The code then passed to the recipient over email. On the other end, the receiver was blindfolded with a transcranial magnetic stimulation (TMS) system on his head. (TMS is a non-invasive method of stimulating neurons in the brain; it’s most commonly used to treat depression.) The TMS headset stimulated the recipient’s brain, causing him to see quick flashes of light. A flash was equivalent to a “1” and a blank was a “0.” From there, the code was translated back into text.

Giant Alien Planet Discovered in Most Distant Orbit Ever Seen: 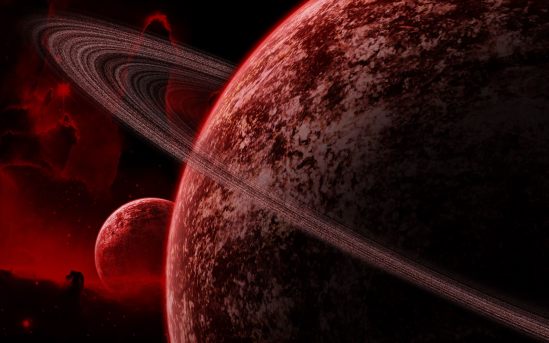 Giant Alien Planet Discovered in Most Distant Orbit Ever Seen

An enormous alien planet — one that is 11 times more massive than Jupiter — was discovered in the most distant orbit yet found around a single parent star.

The newfound planet, dubbed HD 106906 b, dwarfs any planetary body in the solar system, and circles its star at a distance that is 650 times the average distance between the Earth and the sun. The existence of such a massive and distantly orbiting planet raises new questions about how these bizarre worlds are formed, the researchers said.

“This system is especially fascinating because no model of either planet or star formation fully explains what we see,” study lead researcher Vanessa Bailey, a fifth-year graduate student in the University of Arizona’s department of astronomy, said in a statement.

In the most commonly accepted theories of planet formation, it is thought that planets that orbit close to their parent star, such as Earth, began as small, asteroid-type bodies that clumped together in the primordial disk of gas and dust around the burgeoning star. Yet, this process operates too slowly to explain how giant planets form far away from their star, the researcher said.

“A binary star system can be formed when two adjacent clumps of gas collapse more or less independently to form stars, and these stars are close enough to each other to exert a mutual gravitation attraction and bind them together in an orbit,” she explained.

In the HD 106906 system, the star and planet may have collapsed independently, but the materials that clumped together to form the planet were insufficient for it to grow large enough to ignite into a new star, Bailey said.

But, there are still problems with this scenario. For one, difference between the masses of two stars in a binary system is typically no more than a ratio of 10 to 1.

Researchers are also keen to study the new planet, because leftover material from when the planet and star formed can still be detected.

“Systems like this one, where we have additional information about the environment in which the planet resides, have the potential to help us disentangle the various formation models,” Bailey said. “Future observations of the planet’s orbital motion and the primary star’s debris disk may help answer that question.”

The planet HD 106906 b is only 13 million years old, and is still glowing from the residual heat from its formation,” the researchers said. By comparison, Earth formed 4.5 billion years ago, which makes it roughly 350 times older than the newfound exoplanet.

The planet was found using a thermal infrared camera mounted on the Magellan telescope in the Atacama Desert in Chile. The researchers used data from the Hubble Space Telescope to confirm their discovery.

The study, which has been accepted for publication in a future issue of The Astrophysical Journal Letters, could lead to a better understanding of distantly orbiting exoplanets.

“Every new directly detected planet pushes our understanding of how and where planets can form,” study co-investigator Tiffany Meshkat, a graduate student at Leiden Observatory in the Netherlands, said in a statement. “Discoveries like HD 106906 b provide us with a deeper understanding of the diversity of other planetary systems.”

CXCR2- a key genetic culprit that is implicated in the tumor formation, growth and progression in a mouse model of colon cancer has been identified by scientists.

“We have been trying for the past several years to understand the precise molecular links between inflammation and cancer, said DuBois. “We have demonstrated that CXCR2 mediates a critical step in the setup of the blood circulatory machinery that feeds tumor tissue. This provides an important new clue for the development of therapeutic targets to neutralize the effect of CXCR2 on colon cancer.”

The results provide critical new clues toward the prevention of colorectal cancer, the second leading cause of cancer deaths in the U.S. Despite the availability of colonoscopy screening, the 5-year survival rate remains low, due to a large number patients presenting with advanced stages of the disease. Currently, there are no clinically available blood tests for the early detection of sporadic colon cancer.

Inflammation has long been associated with increasing one’s risk for colon cancer. For instance, more than 20 percent of patients with a form of inflammatory bowel disease (IBD) develop colorectal cancer within 30 years of diagnosis. This colitis-associated cancer has a slow progression, but a very poor response to treatment and a high mortality rate.

Researchers have known that the broad mechanisms of cancer involve an interplay with the immune system response that includes: recruiting immune cells that influence the tumor microenvironment, escaping from host immunosurveillance and suppression, shifting of the host immune response, and tumor-associated angiogenesis to establish the blood supply.

For the study, the research team first “knocked-out” or removed the CXCR2 gene in mice, and found that the signs typically associated with inflammation were prevented. Furthermore, they demonstrated that CXCR2 dramatically suppressed colonic inflammation and the colitis associated tumor formation, growth and progression in mice.

CXCR2 decorates the outer part of immune cells called myeloid-derived suppressor cells, or MDSCs, that work to block the immune response of killer CD8+ T cells. In the knockout mice, without CXCR2 present, the MDSC cells could no longer migrate from the circulatory system to the colon, dodge the killer CD8+ T cell immune response, and feed the blood supply of the tumor environment. Furthermore, when they transplanted normal MDSC cells (with normal CXCR2) into the knockout mice, tumor formation was restored.

“These results provide the first genetic evidence that CXCR2 is required for recruitment of MDSCs into inflamed colonic mucosa and colitis-associated tumors,” said DuBois.

For DuBois, who has devoted his career to unraveling the inflammatory circuitry responsible for colon cancer, the results help connect the dots between the immune system, inflammation and tumor formation and metastasis.

DuBois’ team was the first to show that colorectal tumors contained high levels of the enzyme cyclo-oxygenase-2 (COX-2), a key step in the production of pro-inflammatory mediators such as prostaglandin E2 (PGE2). PGE2 triggers production of a CXCR2 molecule that fits into CXCR2 like a baseball into a glove’s pocket and activates it. CXCR2, like the pied piper, recruits MDSCs from the bloodstream to sites of inflammation, causing the colon cancer tumors to evade the immune killer CD8+ T immune response.

“Our findings reveal not only how MDSCs are recruited to local inflamed tissues and tumor microenvironment and how local MDSCs contribute to colorectal cancer progression, but now also provide a rationale for developing new therapeutic approaches to subvert chronic inflammation- and tumor-induced immunosuppression by using CXCR2 antagonists and neutralizing antibodies,” said DuBois.

They say the chemical could help render people “invisible” to the insects.

At the American Chemical Society meeting, they revealed a group of compounds that could block mosquitoes’ ability to smell potential targets.

When a hand with these chemicals was placed in a mosquito filled enclosure, it was completely ignored.

The team says their work could help prevent the spread of deadly diseases.

Mosquitoes are among the most deadly disease-carrying creatures. They spread malaria, which in 2010 killed an estimated 660,000, according to the World Health Organization (WHO).

Ulrich Bernier of the United States Department of Agriculture (USDA) who presented the work, said his team was exploring other options to Deet – a repellent which some do not favour.

These chemical compounds, including 1-methylpiperazine, were found to completely block their sense of smell.

The compounds could be added into many cosmetics and lotions, Dr Bernier added.

Commenting on the work, James Logan of the London School of Hygiene and Tropical Medicine, said it was exciting to find out exactly which chemicals repelled mosquitoes.

“Although we already have good repellents on the market, there is still room for new active ingredients. The challenge that scientists face is improving upon the protection provided by existing repellents.

“If a new repellent can be developed which is more effective, longer lasting and affordable, it would be of great benefit to travellers and people living in disease endemic countries,” Dr Logan told BBC News.

But he said that it would take many years before a new product would make it to market.

Authorities have found the remains of 167 people, believed to be at least 50 years old, in the southern Mexican state of Chiapas, officials said.  The remains were discovered inside a cave on the Nuevo Ojo de Agua ranch, and show no visible signs of violence, according to a statement from state prosecutors  Studies will be done to determine the age, sex and cause of death of each person, it read. The prosecutors promised not to rule out “any line of investigation.”  Though the remains are thought to be more than half a century old, the discovery is still sure to attract attention in a country where mass graves have been unearthed in recent years.  The bodies of 72 migrants from Central and South America were discovered at a ranch in northern Mexico in August 2010. In the same area, authorities found mass graves last year, containing the remains of nearly 200 people. They began finding the graves while investigating the kidnappings of bus passengers.