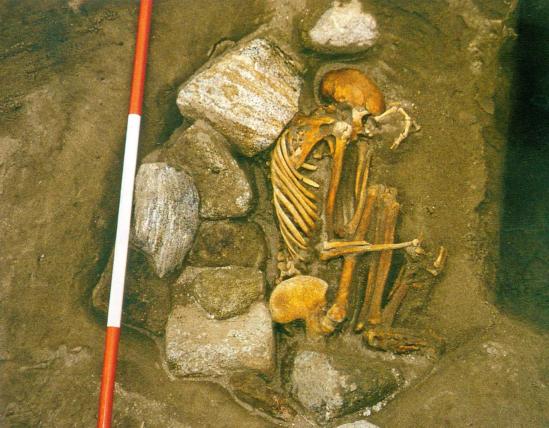 Yes you just read that right, there are indeed mummies being discovered off the coast of Scotland that are made up of the body parts (or at least the bones) of multiple humans, making them the living embodiment of the classic Frankenstein monster. It’s not often that one finds a body buried with a jawbone that’s taken from a different body than the skull that its attached to, and the scientists that are working with the bodies that’ve been discovered this past month have certainly never come across cases as strange as these before. It is along the West Coast of South Uist, an island in the Hebrides that has given up a couple of corpses with remains as old of 3,5000 years old. These mummified bodies suggest that the first residents of the island of South Uist were not without their strange activities in the body burial sector – strange by today’s standards, anyway. It was researchers led by archaeologist Michael Parker-Pearson of the University of Sheffield that turned up this find, they digging near a more modern graveyard by the name of Cladh Hallan. The team was excavating a set of three roundhouses from a village which was occupied from approximately 2200 BC to 800 BC, each of the skeletons being recovered in a fetal position. These bodies appeared to have been preserved in peat bogs for what must have been a year or longer, then placed in the grave sites having been relatively well preserved by the high acidity and low oxygen of the area. These skeletons were found, strangely enough, to be made up of several bodies, each of them giving up the correct bit to create one human skeleton. These single full bodies had such oddities, of course, as arthritis on the vertebrae of the neck but not on the rest of the spine, a skull with no teeth on the upper jaw while the bottom had none, and at least three different sets of bones having been used at different times in all. One body showed bones with parts showing several hundred years time between them. Parker-Pearson spoke with LiveScience on the subject, speaking on the importance of the find:

“Altogether, these results have completely changed our ideas about treatment of the dead in prehistoric Britain. Other archaeologists are now identifying similar examples now that the breakthrough has been made — beforehand, it was just unthinkable.” – Parker-Pearson

Archaeologist Terry Brown of the University of Manchester has done DNA tests on analysis of one of the bodies dubbed female and has found that the lower jaw, thigh bone, and arm bone all came from different people, none of them maternally related.