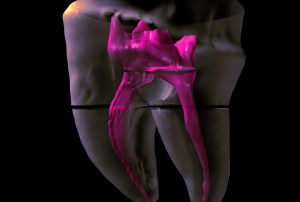 Root-canaled teeth are essentially “dead” teeth that can become silent incubators for highly toxic anaerobic bacteria that can, under certain conditions, make their way into your bloodstream to cause a number of serious medical conditions—many not appearing until decades later.

Most of these toxic teeth feel and look fine for many years, which make their role in systemic disease even harder to trace back.

Sadly, the vast majority of dentists are oblivious to the serious potential health risks they are exposing their patients to, risks that persist for the rest of their patients’ lives. The American Dental Association claims root canals have been proven safe, but they have NO published data or actual research to substantiate this claim.

Fortunately, I had some early mentors like Dr. Tom Stone and Dr. Douglas Cook, who educated me on this issue nearly 20 years ago. Were it not for a brilliant pioneering dentist who, more than a century ago, made the connection between root-canaled teeth and disease, this underlying cause of disease may have remained hidden to this day. The dentist’s name was Weston Price — regarded by many as the greatest dentist of all time.

Most dentists would be doing an enormous service to public health if they familiarized themselves with the work of Dr. Weston Pricei. Unfortunately, his work continues to be discounted and suppressed by medical and dental professionals alike.

Dr. Price was a dentist and researcher who traveled the world to study the teeth, bones, and diets of native populations living without the “benefit” of modern food. Around the year 1900, Price had been treating persistent root canal infections and became suspicious that root-canaled teeth always remained infected, in spite of treatments. Then one day, he recommended to a woman, wheelchair bound for six years, to have her root canal tooth extracted, even though it appeared to be fine.

She agreed, so he extracted her tooth and then implanted it under the skin of a rabbit. The rabbit amazingly developed the same crippling arthritis as the woman and died from the infection 10 days later. But the woman, now free of the toxic tooth, immediately recovered from her arthritis and could now walk without even the assistance of a cane.

He then went on to show that many chronic degenerative diseases originate from root-filled teeth—the most frequent being heart and circulatory diseases. He actually found 16 different causative bacterial agents for these conditions. But there were also strong correlations between root-filled teeth and diseases of the joints, brain and nervous system.

Dr. Price went on to write two groundbreaking books in 1922 detailing his research into the link between dental pathology and chronic illness. Unfortunately, his work was deliberately buried for 70 years, until finally one endodontist named George Meinig recognized the importance of Price’s work and sought to expose the truth.

In what is nearly a replay of the Climategate e-mail scandal of the University of East Anglia, independent climate blogger Brandon Shollenberger has been threatened with a lawsuit and arrest if he releases data that climate alarmists left online unencrypted showing their claim that 97.1 percent of climate scientists “endorsed the consensus position that humans are causing global warming” is false — and a huge fabrication. The lawsuit threat is the latest development in a drama that began a little over a year ago, when Shollenberger scooped the global establishment media and the world scientific community to expose one of the biggest science frauds of all time.

We’ve all seen and heard reports and statements, too numerous to be counted, that “more than 97 percent” of scientists endorse the proposition that humans are causing catastrophic climate change. Al Gore, Barack Obama, Joe Biden, Hillary Clinton, Nancy Pelosi, Arnold Schwarzenegger, Jerry Brown, et al — have repeated (again and again and again) this climate “consensus” claim. And the New York Times, CNN, CBS, ABC, NBC, PBS, et al, parrot these parrotings over and over and over, never bothering to check, let alone challenge, the absolute ludicrousness of the hyperbolic assertion.

The 97-percent myth was launched last year by Australian global-warming activist John Cook and the alarmist website, SkepticalScience.com. Responsible scientists and sensible laymen were properly skeptical of the SkepticalScience claims from the get-go, but it took the investigative digging of independent blogger Brandon Shollenberger to expose how Cook was cooking the data.

Incredibly (but not so surprisingly, considering the fanaticism of some climate zealots), after deconstructing Cook’s data that was publicly available, Shollenberger found that only 65 (yes, 65) of the 12,000+ scientific abstracts Cook and his team of volunteers studied can be said to endorse the position that human activity is responsible for most of the experienced global warming. For a 97.1-percent “consensus” we would expect 11,640+ abstracts to endorse anthropogenic (human-caused) global warming, or AGW — not a mere 65! This was big news, but the silence from Big Media was deafening, which was, again, not so surprising. And this was not the only newsworthy revelation concerning the Cook study, which Cook tellingly referred to as “The Consensus Project” or “TCP.” Clearly, Cook and his band of zealous sous chefs cooked the data recipe to create their consensus pièce de résistance. They were caught pants down, in flagrante delicto; but, again, silence from the mainstream media newshounds who can be counted on to bay and howl unceasingly at the slightest peccadillo, misstep, or blooper by political conservatives.

As we noted, Cook’s “study” was merely an expanded reprise of the earlier, much-quoted, fraudulent “research” of Naomi Oreskes, who first popularized the 97-percent consensus deception in 2004. We wrote:

Cook’s “Introduction” admits that “TCP is basically an update and expansion of Naomi Oreskes’ survey of the peer-reviewed literature with deeper analysis.” That is an interesting admission, since the 2004 Oreskes study — which was the original source for the 97 percent claim — was exposed for the same methodological flaws. Dr. Benny Peiser, a social science professor at John Moores University and visiting fellow at the University of Buckingham, eviscerated the Oreskes study, pointing out that Oreskes had falsified the so-called consensus by her faulty selection criteria in choosing papers to include in her survey.

If You Print the Truth, We’ll Sue You.

But Shollenberger did not rest on his laurels; he kept digging. Last week, on May 15, Shollenberger published his 100th posting, entitled, “MY HUNDREDTH POST CAN’T BE SHOWN.”

Dear readers, I wanted to do something special for my hundredth post at this site. I picked out a great topic for discussion. I wrote a post with clever prose, jokes that’d make your stomach ache from laughter and even some insightful commentary. Unfortunately, I can’t post it because I’d get sued.??

In fact, the University of Queensland (in Queensland, Australia) threatened to sue Shollenberger if he even published their threatening letter to him! And, for an extra measure of overkill, the university implied that Shollenberger had illegally “hacked” their computer system, and that he might face arrest and criminal charges.

According to Shollenberger, he recently retrieved the raw data of Cook, et al from a “publicly accessible, third-party website,” where it was being stored. Shollenberger says it didn’t require any “hacking” because it was unprotected and unencrypted.

After some consideration and consultation, Shollenberger announced May 18 on his blog that he is challenging the university and “calling their bluff.” He released their letter and said he would release the Cook data, unless the university, SkepticalScience, or Cook would respond to his inquiries for an explanation as to what legal or ethical consideration should compel him not to publish this publicly accessed data. This a replay of the Climategate e-mail scandal of the University of East Anglia, where “scientists” refused to make public their data for peer and public review, so that an honest assessment of the alleged science upon which policies affecting the entire planet (and involving trillions of dollars) might be conducted. They illegally refused Freedom of Information requests, destroyed data, and threatened legal action against those who divulged their e-mail communications concerning their unethical and illegal activities.

So here’s the challenge I want to propose to the Skeptical Science team, to the University of Queensland, and to anyone else who thinks I shouldn’t release the data I possess:

Tell me what material I possess could cause harm if disseminated. Tell me what agreements or contractual obligations would be impinged upon if that material were released to the public.

If you are unable or unwilling to meet such a simple challenge, I’ll release the data and you can bite me. I mean, sue me.