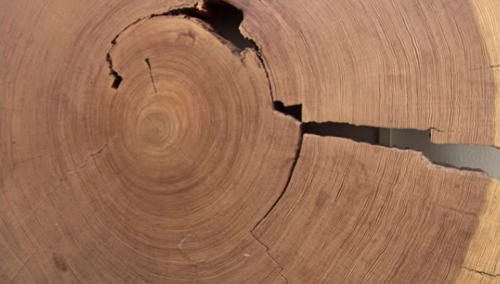 A new analysis of 2,000 years of tree ring data has quickly made climate change deniers’ list of greatest hits to the theory of manmade global warming. The tree rings “prove [the] climate was WARMER in Roman and Medieval times than it is now,” the British newspaper the Daily Mail reported last week, “and [the] world has been cooling for 2,000 years.” That and other articles suggest the current global warming trend is a mere blip when viewed in the context of natural temperature oscillations etched into tree rings over the past two millennia. The Star-Ledger, a New Jersey newspaper, mused that the findings lock in “one piece of an extremely complex puzzle that has been oversimplified by the Al Gores of the world.” However, the study actually does none of the above. “Our study doesn’t go against anthropogenic global warming in any way,” said Robert Wilson, a paleoclimatologist at the University of St. Andrews in Scotland and a co-author of the study, which appeared July 8 in the journal Nature Climate Change. The tree rings do help fill in a piece of Earth’s complicated climate puzzle, he said. However, it is climate change deniers who seem to have misconstrued the bigger picture. So, what exactly did the study find? Instead of using the width of trees’ rings as a gauge of annual temperatures, as most past analyses of tree rings have done, Wilson and his fellow researchers tracked the density of northern Scandinavian trees’ rings marking each year back to 138 B.C. They showed that density measurements give a slightly different reading of historic temperature fluctuations than ring width measurements, and according to their way of reckoning, the Roman and medieval warm periods reached higher temperatures than previously estimated. That’s significant because “if we can improve our estimates for the medieval period, then that will help us understanding the dynamics in this climate system, and help us understand the current warming,” Wilson told Life’s Little Mysteries. But it’s old news that Northern Europe experienced a natural warm period 2,000 years ago and during the 11th century. Not much is known about the Roman period, but the medieval warm spell primarily resulted from a decrease in volcanic activity, Wilson said.Volcanic ash in the atmosphere tends to block the sun, decreasing Earth’s surface temperature. The current warming, on the other hand, has nothing to do with volcanoes. “None of this changes the fact that the current warming can’t be modeled based on natural forces alone,” he said. “Anthropogenic [greenhouse gas] emissions are the predominant forces in the late 20th century and early 21st century period.” That Scandinavia may have been slightly warmer in the 11th century than today also doesn’t change the fact that the world, as a whole, is warmer now. “This data is spatially specific. You would expect to see this trend in northern Scandinavia, but not in the Alps,” Wilson said. “Almost all models show that the current global warming is probably warmer overall than that warming.” Finally, according to Gavin Schmidt, a NASA climate scientist, the tree rings show what mounds of other data have shown as well: For the past few millennia, Earth’s northern latitudes had been cooling down overall. “Similarly, we expect that over the same period the tropics should have warmed slightly,” Schmidt said in an email. These trends resulted from shifts in the Earth’s orbit on thousand-year-long time-scales. But Wilson, Schmidt and the vast majority of climate scientists agree: human-caused warming of the entire globe now overwhelms those subtle, regional heat redistributions. World temperatures are now pushing in only one direction: up.