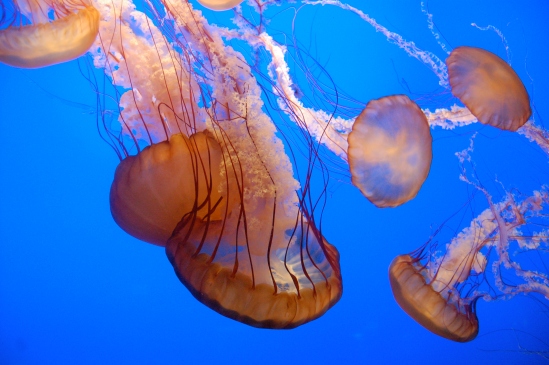 A potentially “immortal” jellyfish species that can age backward—the Benjamin Button of the deep—is silently invading the world’s oceans, swarm by swarm, a recent study says.  Like the Brad Pitt movie character, the immortal jellyfish transforms from an adult back into a baby, but with an added bonus: Unlike Benjamin Button, the jellyfish can do it over and over again—though apparently only as an emergency measure.

About as wide as a human pinky nail when fully grown, the immortal jellyfish (scientific name: Turritopsis dohrnii) was discovered in the Mediterranean Sea in 1883. But its unique ability was not discovered until the 1990s.  How the Jellyfish Becomes “Immortal”.  Turritopsis typically reproduces the old-fashioned way, by the meeting of free-floating sperm and eggs. And most of the time they die the old-fashioned way too.  But when starvation, physical damage, or other crises arise, “instead of sure death, [Turritopsis] transforms all of its existing cells into a younger state,” said study author Maria Pia Miglietta, a researcher at Pennsylvania State University.  The jellyfish turns itself into a bloblike cyst, which then develops into a polyp colony, essentially the first stage in jellyfish life.  The jellyfish’s cells are often completely transformed in the process. Muscle cells can become nerve cells or even sperm or eggs.  Through asexual reproduction, the resulting polyp colony can spawn hundreds of genetically identical jellyfish—near perfect copies of the original adult.  This unique approach to hardship may be helping Turritopsis swarms spread throughout the world’s oceans.

2 responses to “Immortality found in nature”